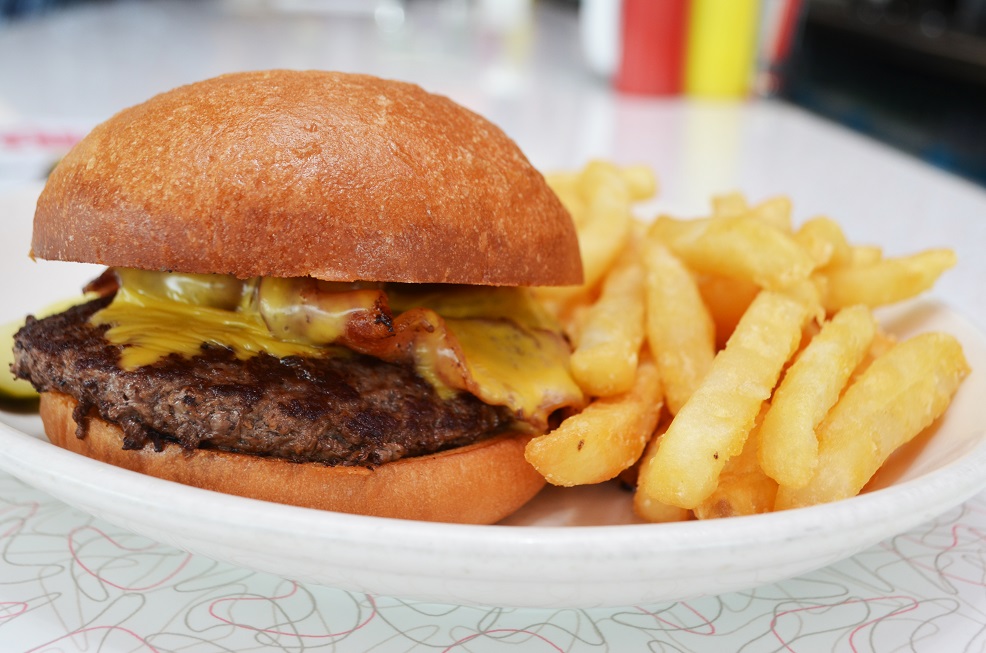 Ever wondered how it would feel to go back in time and enjoy a good meal at one of the diners around? When I walked into Pal’s Diner I was certainly surprised by the vintage feel factor that it had that instantly transported me back in time. Built in 1954 by the Manno Dining Car Company of Bellview, New Jersey, Pal’s Diner is recognized as a historical structure and is recorded in the Historical Site Survey and Smithsonian Institute. While there are many luxurious diners out in Grand Rapids, the old-fashioned nostalgic décor of Pal’s Diner with panoramic picture windows and mirrored ceiling and terrazzo stone floors immediately gets your attention.
However, it was not the décor alone that made my experience memorable. When I walked into the diner I was immediately attended by a waitress who took my order. To begin with I decided to order Chubby Checker Cheese Burger listed in the Pal’s Original Burgers list on the menu. The burger is topped with hot bacon with melted American cheese. While I waited for my burger to arrive at my table I noticed the old-styled décor that has still managed to make its place in a world where art décor fronts and marble and linoleum floors are the most common sights to see. Surprisingly, Pal’s Diner not just has the 50’s style interiors, but they also have the jukebox and shake mixers that date to that era that adds to the overall experience. The diner also has the original neon-lit exterior clock that still shows the exact time.
After 10 minutes the burger arrived and it was as expected. The burger was well cooked. It had crispy bacon accompanied by crunchy golden fries which I must admit were the best fries I had ever tasted. The burger itself was good not in terms of looks, but it had a single patty  which was pretty thick enough for its price.
Pal’s Diner also has the Wall of Fame where you get a sneak peek into the history of the diner and see photos of many artists that have been here. You also get to read cuttings and tear sheets from old publications and newspapers that have written about the diner. With a good amount of investment, owners Barry and Sam Brown have managed to keep the legacy alive in minor details that is commendable. With the nostalgic setting, delicious meals, and friendly service Pal’s Diner is certainly a great must-visit diner if you are in Grand Rapids.