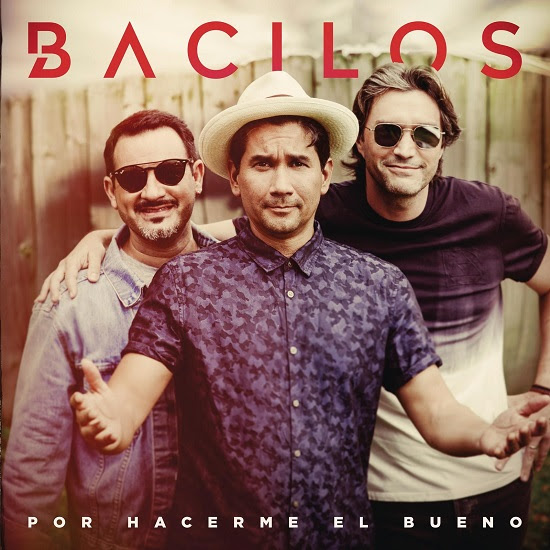 MIAMI (September 22, 2017) – One of Latin pop’s most influential groups returns with its original members after an over 10-year absence. The trio Bacilos, which made history with its fusions of sounds from its members’ respective homelands, releases its single “Por Hacerme El Bueno“, available today at all digital music platforms. In addition, its lyric video premieres today on the group’s VEVO channel. This track is the group’s debut release on Sony Music Latin.
Co-written by vocalist Jorge Villamizar, along with the acclaimed producers Andrés Castro and Guianko Gómez, the danceable “Por Hacerme El Bueno” updates Bacilos‘ musical style while featuring its characteristic vivid Spanish lyrics: “I was left with her face, I was left with her joy, I smoked her words, as she ran away with mine.”
Comprising the Colombian Jorge Villamizar (vocals, guitar), the Puerto Rican J.J. Freire (drums) and the BrazilianAndré Lopes (bass), Bacilos struck gold after the turn of the Millennium with its romantic and socially aware songs.
Hits such as “Tabaco y Chanel,” “Mi Primer Millón“, “Caraluna” and “Pasos de Gigante” became international classics that are universally known to this day. Meanwhile, the group won a GRAMMY® and three Latin GRAMMYs®.
Bacilos gave its farewell concert in February 2007 at the Viña del Mar International Song Festival in Chile.
The group plans to release a studio album and tour Latin America in 2018, with fans eagerly awaiting Bacilos‘ triumphant return.
Sigue a BACILOS en / Follow BACILOS on:
www.facebook.com/bacilosoficial
www.instagram.com/bacilos
BacilosVEVO
Sony Music