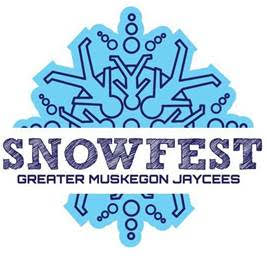 The Greater Muskegon Jaycees annual Snowfest event will return to Downtown Muskegon Friday, February 3 and Saturday, February 4, 2017.  After taking a year off from producing the festival in 2016, the popular winter event will return with a family-friendly “First Fridays” event on Friday night: Frozen Friday, and a jam-packed Saturday including popular events such as the annual “Battle of the Bowls Chili Cook-Off”, snow volleyball, a cornhole tournament, and concluding with a downtown pub crawl.

“The Jaycees chapter has been working hard at rebuilding itself over the past year as the organization had only 12 members at the end of 2015,” says Jamie Hekker, President of the Greater Muskegon Jaycees. “The organization is well positioned with nearly 60 members today and is heading into Snowfest with great momentum.”  As part of the chapter and event’s resurgence, a new Snowfest logo and brand was created by young professional, Kassi Dean.

On Friday, February 3, the Jaycees will host Frozen Friday, taking place on Western Avenue between 3rd and 4th street.  This is in partnership with Downtown Muskegon Now’s First Fridays event series featuring family-friendly free or affordable activities taking place Downtown Muskegon on the first Friday of each month since June of 2016.  Frozen Friday will run from 6pm to 8pm and will feature the movie Frozen played on an outdoor movie screen along with popcorn, a smore station, arts and crafts with the Boys & Girls Club, a Snow Derby with the Boy scouts, and special guest appearances from “Snowlof and Elsa”.

On Saturday, February 4th, a Cornhole and Snow Volleyball Tournament will run simultaneously on Western Avenue between 3rd and 4th street. Registration begins at 9am and tournaments begin at 10am.  Trophies and cash prizes will be given to 1st and 2nd place teams in each tournament. Pre-event registration is requested.  Cost to play is $30 per cornhole team of 2 and $40 per volleyball team of 4.  Those wanting to compete in the popular tournaments should register early at www.muskegonjaycees.org/snowfest.

The Popular Battle of the Bowls Chili Cook-off will take place from 11am to 2pm on Saturday, February 4th at the Holiday Inn and Conference Center in Downtown Muskegon. This event will be in partnership with the Child Abuse Council, who produced the event last year in Snowfest’s absence.   Area restaurants will go head to head to see who has the best Chili.  Chili samples will be 20 for $10 or $1 per sample bowl.

“We are excited to have the opportunity to partner with the businesses that are already downtown and the Child Abuse Council to help execute this year’s event,” says Stevi Riel, Snowfest Chairperson. The 2017 Snowfest activities will continue throughout downtown’s bars and restaurants.

Another exciting feature this year are SNO-X Snowmobile Races by Michigan Sports Promotions and sponsored by Fox Powersports at the Mart Dock (560 Mart St #1).  Registration for non-circuit racers begins at 8am and races begin at 11am.  Don’t forget to stop by the sled class check at 10!