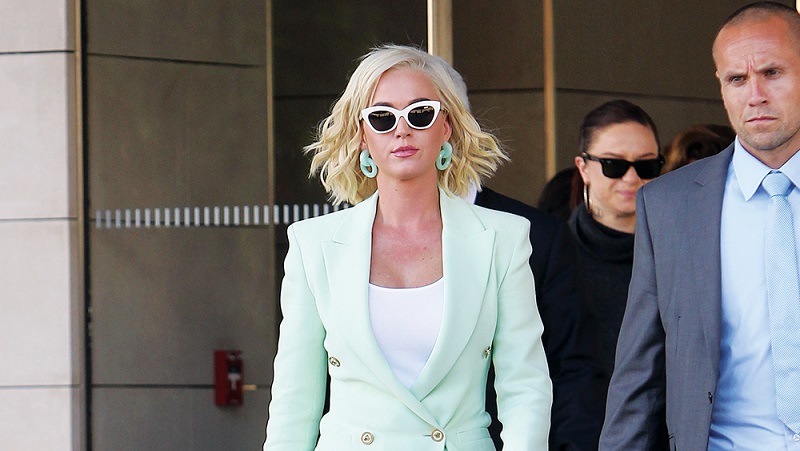 LOS ANGELES – When you hear the six-note passage at the center of Katy Perry’s “Dark Horse” played alongside the one from the 2008 song “Joyful Noise” by Christian rapper Flame, it’s natural to assume that the melodies are nearly identical.

It’s a starkly simple phrase, six descending notes that a marginally talented toddler could bang out on a toy xylophone. And yet, despite the courtroom arguments of musicologists who cited two songs predating “Joyful Noise” that employed a similar melody; of attorneys who claimed it is so simple as to be uncopyrightable; of experts who said that Perry’s fame contributed as much, if not more, to the song’s success; and not least, the testimony by the “Dark Horse” songwriters that they’d never heard the earlier song; a jury found last week that Perry and her co-writers and producers had infringed upon the copyright of “Joyful Noise,” resulting in a $2.78 million windfall for Flame, also known as Marcus Gray, and his co-writer.

But many experts in the songwriting community feel the lack of musical knowledge involved in that decision — which follows the crushing $5.3 million verdict in  the 2015 “Blurred Lines” case , in which Robin Thicke and Pharrell Williams were found to have infringed upon Marvin Gaye’s song “Got to Give It Up,” based on its similar “feel” — will have a chilling effect on songwriters and on culture as a whole.

“They’re trying to own basic building blocks of music, the alphabet of music that should be available to everyone,” defense attorney Christine Lepera said during closing arguments. In a statement after the verdict, on behalf of the “Dark Horse” writers she called the decision a “travesty of justice” and said they will “continue to fight at all appropriate levels to rectify the injustice,” presumably meaning that an appeal is in the offing. (Lapera’s office did not respond to Variety‘s requests for comment.)

Indeed, some music attorneys with expertise in copyright law question the wisdom of placing such complex matters before a jury. “Particularly in music cases, it’s very difficult for a jury of so-called peers to spend several days in court, learning about music and the song and copyright, and come out with a reasonable verdict,” says Ed McPherson, a music attorney specializing in copyright law who has represented Lady Gaga, Frank Ocean, Fergie and others. “In films, for example, there are things called scenes a faire — like a magician pulling a rabbit out of a hat. A judge doesn’t need an expert to know that’s not copyrightable. In music, there might be parallel [instances], but the judge is hearing opposing expert testimony from both sides and doesn’t really know scenes a faire in music. So typically it goes to a jury, whereas with something similar in a film, the judge would have no problem dismissing the case.”

Some experts have proposed that such cases should go before an expert arbitration panel rather than a jury. But music attorney Richard Busch, who won the “Blurred Lines” case, disagrees.

“That is a ridiculous position,” he tells Variety. “We have a constitutional right to a jury trial. Criminal defendants with complex issues like DNA that require scientific expert testimony, whose lives are on the line, are placed before a jury.

“You prove a copyright-infringement case two ways,” he continues. “One is the extrinsic test: The judge listens to the expert testimony and decides whether there are sufficient compositional similarities to take the case before the jury. So the judge is the gatekeeper — it doesn’t go to a jury automatically. If the plaintiff establishes that there are sufficient similarities, then we go to the intrinsic test — basically the ‘ordinary observer’ test — where the jury listens and decides whether the songs sound similar, and they also [hear] the extrinsic test,” he concludes, placing the onus of lost cases on the defense attorneys and experts for failing to convince juries, rather than on the juries themselves.

Particularly in the wake of “Blurred Lines,” such disputes are usually settled out of court. For example, in 2015, the writers of Sam Smith’s “Stay With Me” made an undisclosed settlement with Tom Petty over their song’s similarity to his 1989 hit “I Won’t Back Down,” adding its writers’ names to the credits and royalties, even though the Smith song’s writers claimed not to be previously familiar with the earlier tune. Likewise, Mark Ronson and Bruno Mars’ “Uptown Funk” has added writers twice since it was issued in 2014.

Given the risk, one might wonder why Perry and her team didn’t settle.

“Maybe the money wasn’t right, maybe they honestly believe they didn’t take from [‘Joyful Noise’],” says a top music attorney specializing in copyright who requested anonymity. “But looking at the bigger picture, it’s very important to push back against accepting this as a reality, because it’s stunting creativity if songwriters have to be scared of these litigators. There are only so many chord progressions and melodies that are pleasing to the ear, and they’re used over and over again. It’s inappropriate to give someone a monopoly over a chord progression or a simple melody. It’s bad for artists, music, culture and everyone — although it’s good for plaintiffs who are going to get a windfall from a song they didn’t make a hit.” (“Dark Horse” spent four weeks at the top of Billboard’s Hot 100 chart in 2014.)

And in a twist on conventional knowledge, in such cases the odds often are stacked against the superstar, who has much to lose as a defendant, while the plaintiffs may stand to lose almost nothing.

Music attorney William Hochberg agrees. “Since ‘Blurred Lines,’ there’s been an epidemic of these cases — I turn them away frequently,” he says. “All kinds of people are coming out of the woodwork: ‘Hey, I’ve got a song with a breakbeat, and so does that song in the Top 10!’”

Perry is the focus of the trial, and was personally hit for $550,000 in damages, while her label, Capitol, is responsible for the rest . But it’s unclear exactly who will end up writing the checks. Even though the jury determined that all of the credited “Dark Horse” songwriters and producers — including guest rapper Juicy J and lyricist Sarah Hudson — are liable for the infringement, producer contracts often indemnify the artist from financial damages , and Perry testified that the contested passage was brought to her by co-writer/producers Dr. Luke and Cirkut (Lukasz Gottwald and Henry Walter, respectively). But labels and publishers often have indemnity as well, and either way Perry may have to give up a portion of her publishing from the song.

However, as Busch notes, “It’s not like it’s over. The judge could look at the verdict and set it aside if there is not substantial evidence to support it. People disagree with jury verdicts every day — and that’s why we have appeals.”