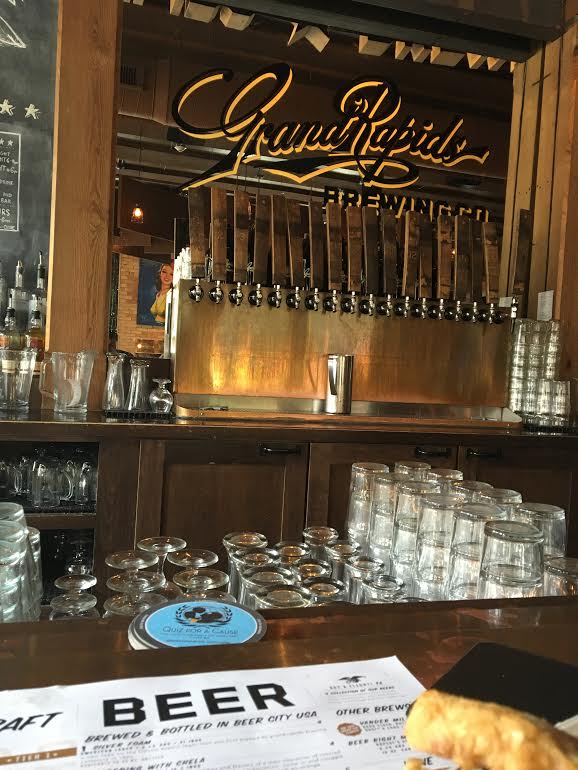 A brewery that’s serving up a limited, but delicious menu is what you’ll find at the Grand Rapids Brewing Co. (GRBC). With a full line up of tap beers and full plates of food, they are one of the most respected and recognizable joints in the Grand Rapids, Michigan brew scene.
1893 is when the journey began and GRBC opened up for business. Starting out as a brewery, they had a successful run, until prohibition stalled the production. Go forward 79 years and in 2012 is when they re-opened shop in the same area, but not the same block of the original.
Not only does the brewery pride itself on brewing beer and cooking food, but also recycling is a huge element that they focus on. They also keep locality within their foundation by re-using supplies to construct and by decorating with local artwork.
I had an unusual burger at GRBC, with condiments and a vessel that set it apart from any other burger. With 1/2 pound of meat, which one half was enough to fill me up, the condiments included jalapeño pepper jelly and peanut butter. Yes creamy, sweet, rich, peanut butter. Also on the sandwich was thick cut bacon, and smoked cheese was an additional option, but I did not have any on mine. The meat patty and it’s dressings were sandwiched between 2 pieces of Texas toast, which was buttery and golden. All of these great ingredients made up the PB &amp; J burger. House made french fries came with, which had a great seasoning blend on them and complimented the sweetness of the burger.
Normally, I do not go for craft beer, but I decided to give it a try, after all, it is the Grand Rapids Brewing Co. My waitress/bartender served me two different samples, one a lighter beer and one a fruitier beer, almost a cider. I chose the light beer. It had a champagne element and crispness with each sip. Golden in color, it did not foam much on top, and had a sweet finish to it.
Overall, this brewery stood out to me as being unique and a definite one to return to. It was hard to make a decision as far as what to order because it was between choosing good or better. There were at least 5 other dishes on the menu that I would have loved to have tried. I would have further explored the lighter beer menu and would have liked to have tried some of the ciders as well. The staff was great and the atmosphere made you feel right at home in such a great city.