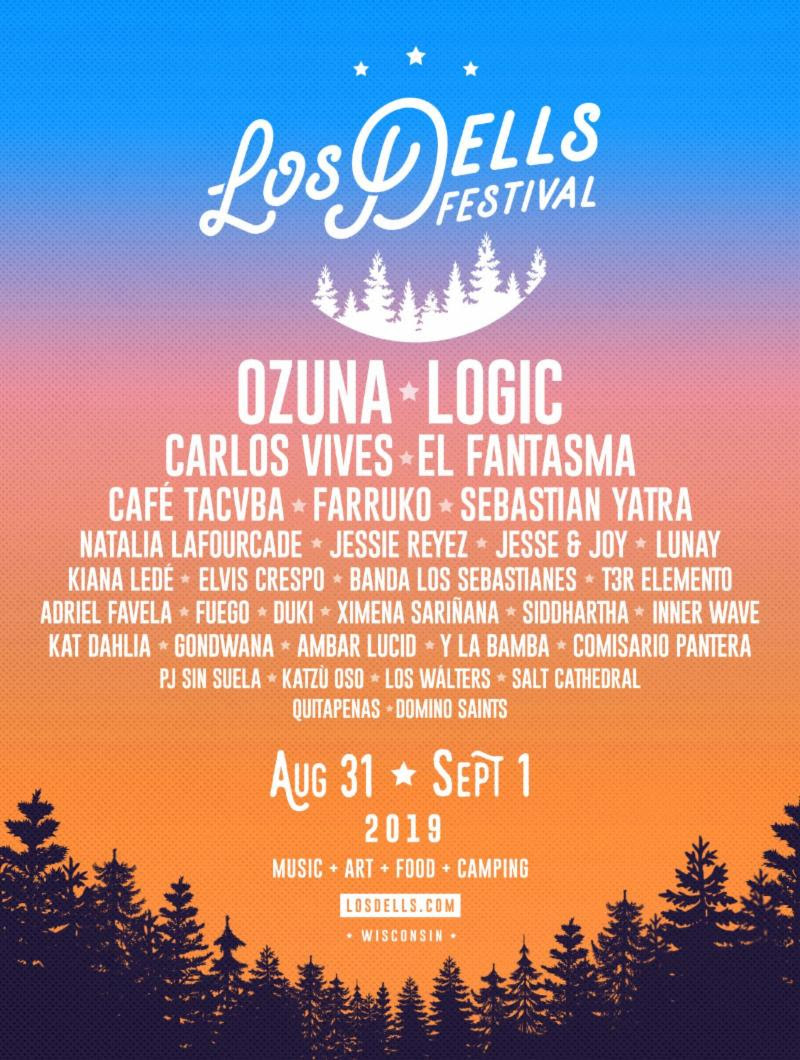 The spectacular artist lineup for Los DellsFestival 2019 is finally unveiled and once again, does not disappoint. Every year the Wisconsin festival has amazed with its carefully curated music artists selection to perform in the major event of 3-stages that will take place at the Woodside Ranch on Labor Day weekend (August 31st & September 1st).
Headlining the festival are OZUNA and LOGIC. Ozuna, a top artist with 43 charting hits on the Hot Latin Songs of Billboard charts in 2018, and who also wrapped last year as YouTube’s most-watched artist globally; being featured in four of the top 10 videos seen around the world. Another top charter and with almost 17 million listeners a month just in Spotify, is Sir Robert Bryson Hall II, better known as LOGIC, the American rapper, singer, songwriter, record producer and author. LOGIC is the only artist to have a #1 album in each of the last three years.
Highlighted acts playing this third edition of Los Dells Festival also include the vallenato and cumbia-pop, musician, songwriter and actor CARLOS VIVES: the Colombian super-star with 32 years of trajectory with songs such as “La Gota Fria” and “Tierra del Olvido” that have become timeless pieces that transcend through generations, and EL FANTASMA: one of the new wave of Mexillennials taking over the regional Mexican and banda music genres with several songs that have landed in the Top 10 in the National airplay charts.
One of Mexico’s most enduring and popular bands, and internationally revered, CAFÉ TACVBA is most definitely a must-see at the festival, along with Puerto Rican singer and songwriter FARRUKO who has rose to fame since his debut studio album and collaborations with heavyweight artists, and SEBASTIAN YATRA, an artist on a quest for global stardom with his warm blend of romantic balladry, Latin pop and reggaeton.
From trap to rap and regional Mexican, from rock and Latin alternative to vallenato, reggaeton and merengue, and from pop music to R&B and soul to reggae and ambient pop. Artists from all the American Continent: from Argentina to Canada via Colombia, Chile, Mexico, Puerto Rico and the U.S. from East to West. This year, Los Dells Festival reveals an exciting and eclectic artist roster of genres that reflect today’s vibrant Latin culture and the music that surrounds it.
This Year, Los Dells Festival is proud to announce that Toyota will be joining LosDells again presenting the Toyota Music Den, artists to be announced.

The 3-stage festival takes place in the middle of the forest and is the only Latin festival in North America that offers full camping capacity (showers, restrooms, convenient store, security, bonfire) to enjoy music comfortably in the outdoors with family and friends. A wide array of resorts and hotel options are in the area, including an option for on-site hotel with VIP packages at a very short walking distance. Los Dells Festival 2-day passes are available via Eventbrite  and at www.losdells.com starting at $159.00 & VIP tickets starting at $299.00. For more information and updates, please visit the festival’s website.