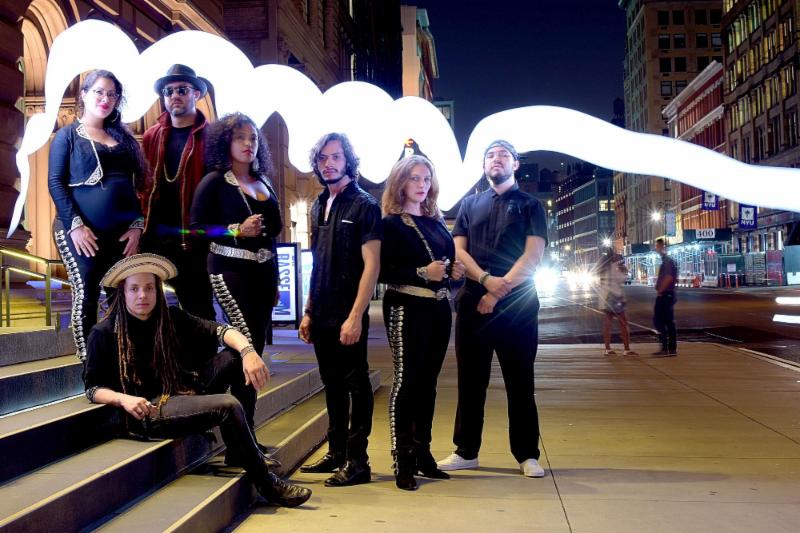 On Friday September 7th, Making Movies and Flor De Toloache will release ‘Amor De Mis Amores,’ a song written by Enrique Chi, frontman of Making Movies, during a trip to Panama. “I was listening to recordings of old Panamanian songwriters,” says Chi, “which inspired the song’s tortured character.” The duet is sung by Chi and Mireya Ramos of Flor De Toloache, telling the story of a lover betrayed, or so it seems, until a chorus of women led by Ramos come in at the end with a revelation: in reality, he mistreated his lover and drove her away.
“The track has that lilting groove and hook that makes your body sway like a palm tree in the breeze,” says Shae Fiol of Toloache, whose powerful vocals fill in the choruses. The musical conversation between Making Movies as the rhythm section and Flor De Toloache’s violin, trumpet, and rich harmonies, creates a nostalgic and seductive track- a big-band sound that harkens back to the Cuban dance-hall bands of 1950s New York.
The collaboration between the groups was dreamed up while on the road- Chi was touring with Las Cafeteras as their guitarist during the GlobalFest Tour, which brought Las Cafeteras, Chi, and Flor De Toloache together at the Fox Theater in Oakland. The joint show led Chi to propose recording together, citing a musical and spiritual kinship. “During the tour I realized that they are sisters to us,” says Chi, “They’re in the same journey of exploring what it means to be a Latino in America today.”
Soon afterward, Chi sent over a demo of the song to Ramos. “Amor De Mis Amores sounded to me like an instant classic,” recalls Ramos, “reminiscent of the Cuban bolero energy with an urban and edgy touch.” Flor De Toloache and Making Movies debuted the song by performing it live together at Joe’s Pub in New York City, where salsa icon Ruben Blades could be seen, iPhone in hand, filming the entire show.