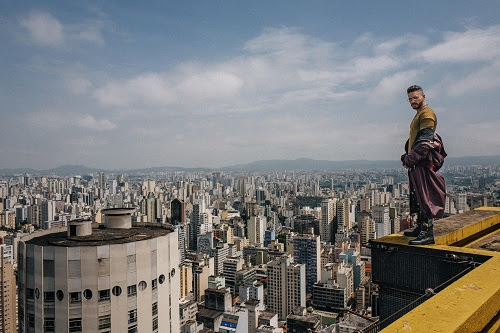 Maluma has just released the highly-anticipated video for new single “Corazón” feat. Brazilian singer Nego do Borel. True to the song’s style, the video is vibrant, fun, sexy and surprisingly sweet. Shot in the city of Sao Paulo with renowned film director Jessy Terrero, the “Corazón” video especially captures part of the essence of Brazil and its people. A very important Brazilian global sports figure makes a cameo appearance – none other than Ronaldo de Assis Moreira, commonly known as soccer legend Ronaldinho– who plays “futbol” with Maluma on the streets of Sao Paulo. It doesn’t get much cooler than that!

Corazón (Official Video) by Maluma & Nego do Borel on VEVO.

“Corazón” was inspired by the ultra popular Brazilian track “Você Partiu Meu Coração” by Nego do Borel feat. Anitta and Wesley Safadão. The original song in Portuguese has become one of the top hits of the year in Brazil, where it also launched Nego do Borel‘s singing career. Maluma fell in love with the song on a recent visit to the country and decided to add urban music influences to its Brazilian pop funk style while respecting its original sound, to create a new fusion with global appeal. Maluma‘s “Corazón” feat. Nego do Borel will no doubt take the song to new heights.
“Corazón” is the first single off Maluma‘s upcoming album, to be released in 2018. The song comes on the heels of Maluma‘s most successful song to-date “Felices los 4” which has garnered countless gold and platinum awards and dominated the top of the charts throughout Latin America, Spain and Europe.
“Corazón” was written by Romeu R3, Bryan Lezcano (Chan “El Genio”), Kevin Jimenez (Kevin ADG), Juan Luis Londoño (Maluma), Jefferson Junior and Umberto Tavarez; and produced by the Rude Boyz (“Felices Los 4“, “Chantaje” and “Borró Cassette“) as well as Umberto Tavares, Maozinha and Carlos Lago da Costa.