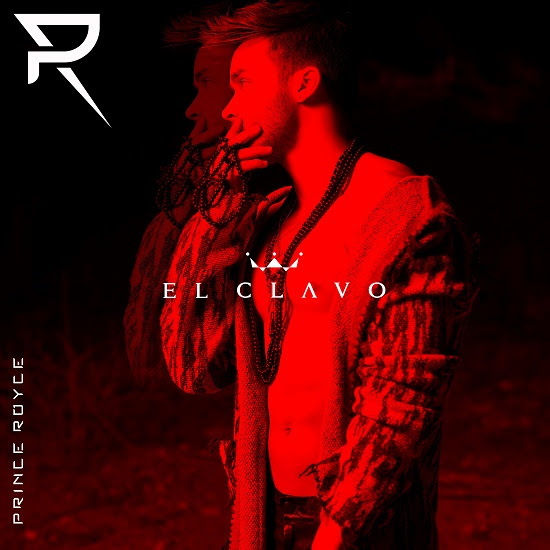 Prince Royce releases his highly-anticipated and fierce new single and video, “El Clavo” (“The Nail”). The single and video are available now on all digital platforms. Click HERE to check them out.
Royce, who has been known for surprising audiences with fresh and creative musical propositions, presents in “El Clavo” an urban fusion with an ear-catching beat and daring lyrics.
“I love to have fun with music, twist it up and bring different vibes to my fans and the audience in general” says Royce. “That is precisely what I’m doing now. “El Clavo” is a fun and sexy song that I know a lot of people will relate to”.
The “El Clavo” music video, directed by the renowned Carlos Pérez for Elastic People, presents a powerful and provocative performance voiced by a women that dares to free herself from years of abuse and neglect inflicted by her partner and dares to look for fulfillment for the first time in her life.  The visual is packed with provocative and sexy scenes that highlight Royce’s artistry beyond limits, delivering a final product that illustrates the leading lady’s journey and her choice for a better future with a man that truly appreciates her. The director wanted to produce an artistic, progressive and memorable collage of images supporting the song’s storyline without the use of the literal interpretation of the lyrics, while showcasing Royce’s versatility as an artist and as a performer.
“El Clavo” was written by Prince Royce, Edgar Barrera, Camilo Echeverry and Luigi Castillo. It was produced by Edgar Barrera and co-produced by Royce.
The new single comes on the heels of the success of his most recent collaborations: trap record “No Love” with Noriel & Bryant Myers and the global hit “Sensualidad” with Bad Bunny & J Balvin.
Royce is a finalist at this year’s Billboard Latin Music Awards in three categories: “Tropical Artist of the Year – Solo”, “Tropical Song of the Year” (Deja vu) and “Tropical Album of the Year” (FIVE).
About Prince Royce
In the past 7 years, multi-platinum award-winning, singer and songwriter Prince Royce has become a bonafide Latin superstar, scoring 15 number one radio hits, 22 Latin Billboard Awards, 19 Premio lo Nuestro Awards (Univision), 19 Premios Juventud Awards (Univision), 6 Latin AMAs, and 11 Latin GRAMMY® nominations.
Royce has a massive fan base with more than 2 billion streams online, over 45 million followers on social media and he has sold out some of the most prestigious venues in Latin America and the US.
His latest album, FIVE, was released in February 2017 and is Royce’s fifth career album. The record debuted at #1 on Billboards Latin Albums chart and earned Royce the highest first-week sales of any Latin album in the two years prior to the release. The production, was preceded by four hit singles, “Culpa al Corazón”, “La Carretera”, “Moneda”, “Deja vu” and includes a plethora of wonderful collaborations with Shakira, Zendaya, Chris Brown, SpiffTV, Farruko, Gente de Zona, Gerardo Ortíz and Arturo Sandoval. The album has been certified Double Platinum by the RIAA in the United States and has garnered multiple international certifications. FIVE, made the Top Latin Albums list at Billboard’s coveted end of year issue and Billboard also named Royce one of the Top Latin Artists of 2017.
Some of his other creative collaborations include: Jennifer Lopez, Selena Gomez, Snoop Dogg, Pitbull, Thalia, Maná, Daddy Yankee, among others. Prince Royce has also started to purse his acting career and co-starred as Peter in the Fox Live musical broadcast of “The Passion” in 2016 and was part of the cast of Hulu’s hit series, “East Los High”. 2017 also brought other accolades including his induction into the Bronx Hall of Fame and running the New York City Marathon to raise funds and awareness on education in public schools and kidney disease and was named Grand Marshall at the 2018 Miami Marathon.
Sigue a PRINCE ROYCE en / Follow PRINCE ROYCE on:
www.princeroyce.com
www.facebook.com/princeroyce
www.twitter.com/princeroyce
www.instagram.com/princeroyce
www.youtube.com/PrinceRoyceVEVO