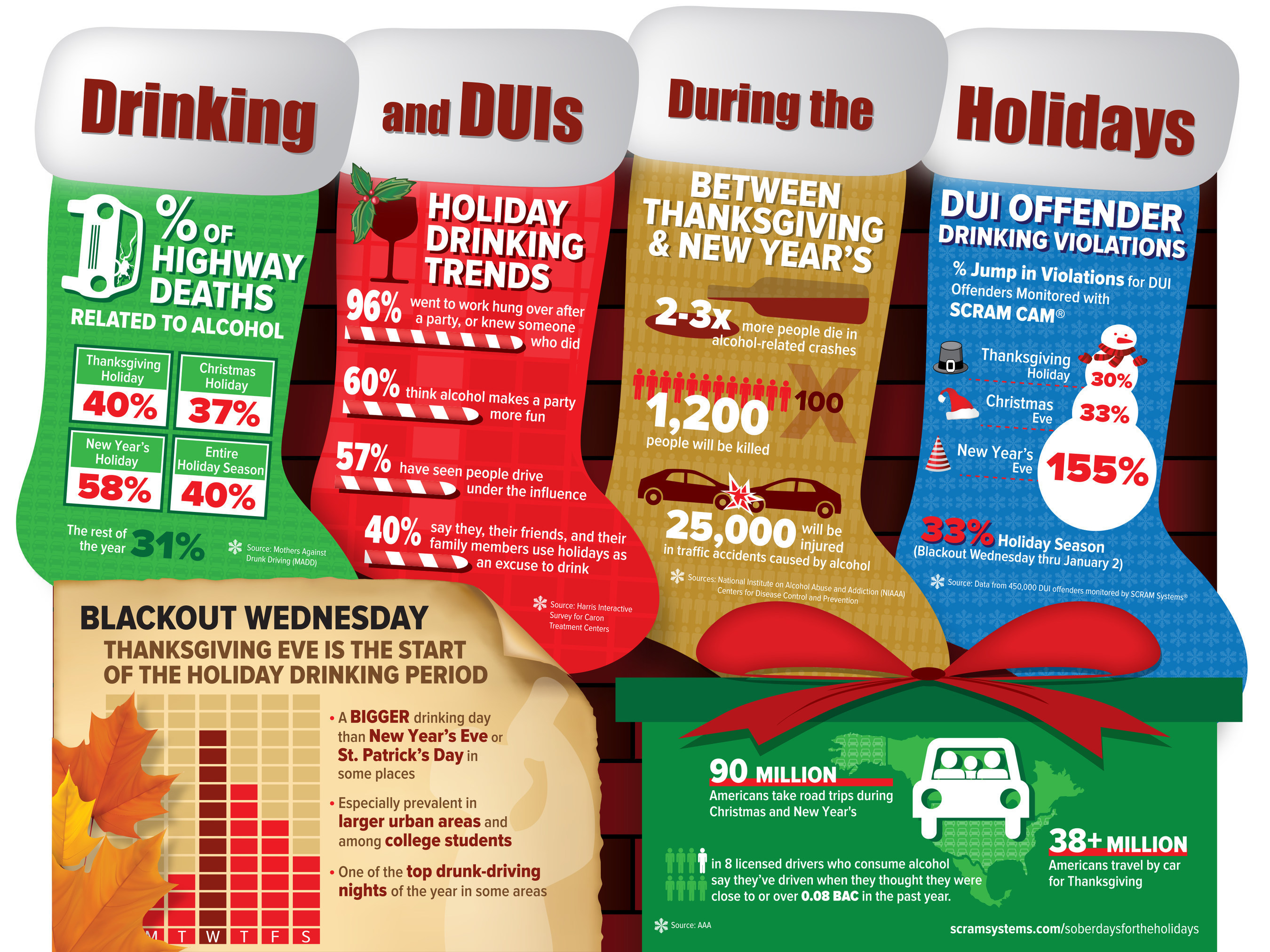 The holiday season officially starts next week, and with it comes the most dangerous time of the year for binge drinking, drunk driving and alcohol-related fatalities. According to a number of national organizations, these problems are expected to spike on Thanksgiving Eve, termed “Blackout Wednesday” or “Drinksgiving” in many cities.

In a report released by Alcohol Monitoring Systems (AMS) about the drinking behavior of over 450,000 DUI offenders who were monitored 24/7 for alcohol consumption, drinking violations for the monitored group jumped an average of 33% between Thanksgiving and New Year’s Day, compared to the average violation rate the rest of the year. According to AMS Vice President Lou Sugo, the findings illustrate how closely drinking is tied to the holidays. “These individuals are being monitored every 30 minutes, and they know they’re going to be caught,” says Sugo. “You can imagine the rate of drinking for those who aren’t being monitored.”

According to the National Highway Traffic Safety Administration (NHTSA), there were 3,857 alcohol-related traffic deaths during December between 2009 and 2013. On average, 728 people are injured or killed in drunk-driving crashes each day during the holiday season.

The data on high-risk holiday drinking and alcohol-related deaths and injuries are highlighted in a new infographic just released as part of the company’s annual Sober Days for the Holidays public awareness campaign. The campaign also includes free resources to help communities promote safe and sober celebrations.

One of the most troubling trends of the season is a substantial rise in binge drinking and DUIs on ThanksgivingEve. The day before Thanksgiving has become particularly high-risk for college students, and bars in some urban areas report seeing more business on that day than St. Patrick’s Day or New Year’s. AMS reports that alcohol violations are as much as 37% higher on Blackout Wednesday–a larger jump than on Thanksgiving Dayor Christmas.

Sober Days for the Holidays

Law enforcement agencies throughout the country will be running roadside sobriety checkpoints, including the Drive Sober or Get Pulled Over campaign organized by NHTSA. In addition, AMS encourages everyone take some simple steps to celebrate safely: