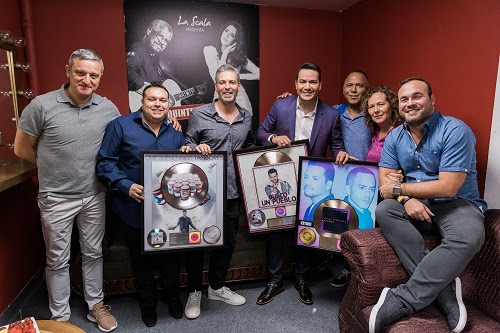 Salsa icon Víctor Manuelle and trap king Bad Bunny, join forces to release one of the most inspired singles and video of the year. “Mala y Peligrosa” is available today on all digital-music stores.
The music video was filmed in Puerto Rico and directed by Fernando Lugo, who is known for his work with urban-music stars such as Yandel and Maluma. In the atmosphere of a clandestine bar where a band plays Latin jazz and flirtatious eye-contact takes place across the pool table, Víctor Manuelle and Bad Bunny cross paths with the woman who could be this song’s muse.
Co-written by Víctor Manuelle, Bad Bunny and Víctor Alfonso Sanabria-López, “Mala y Peligrosa” features a catchy chorus in Spanish that will quickly hook listeners: “Bad and dangerous woman, she has a sensual gaze and a lovely face… a woman who’s sure of herself, a total goddess.”
Though it’s the first time that Bad Bunny has performed salsa music, the natural chemistry between these talented Puerto Rican artists is palpable. Inviting urban artists to join his tropical concept is nothing new forVíctor, as he has duetted with reggaetón greats such as Héctor y Tito, Don Omar, Jowell & Randy, and Tego Calderón, ever since the genre was in its beginnings. In 2016, his single “Imaginar” with Yandel was named the #1 song of the year on Billboard‘s “Tropical Airplay” year-end chart.
“Mala y Peligrosa” is the second single from Víctor Manuelle‘s forthcoming album. It follows in the footsteps of “Hasta Que Me Dé La Gana“, Víctor Manuelle‘s previous single remained 15 straight weeks at #1 on ReporteNacional Colombia’s “Tropical Airplay” chart. This song has also gone Top 10 on the tropical charts of the U.S., Puerto Rico, Perú, Dominican Republic, Panamá and El Salvador.
Salsa’s continued vitality is due in large part to the talent and work ethic of Víctor Manuelle, who holds the record for most #1 hits on Billboard‘s “Tropical Songs” chart with a total of 28 throughout his 24-year career.
His most recent album Que Suenen Los Tambores (Let The Drums Sound, 2015) was certified Gold by the RIAA for its sales in the U.S. and Puerto Rico. The chart-topping, anthemic title track went Platinum.
Meanwhile, his Gold-certified album Busco Un Pueblo (2012) produced the Platinum-certified singles “Si Tú Me Besas” and “Ella Lo Que Quiere Es Salsa“.
Víctor Manuelle continues putting the finishing touches on his eagerly awaited 17th studio album.
Sigue VÍCTOR MANUELLE en / Follow VÍCTOR MANUELLE on:
www.facebook.com/victormanuelleonline
www.twitter.com/victormanuelle
www.instagram.com/victormanuelleonline
www.youtube.com/victormanuelleVEVO