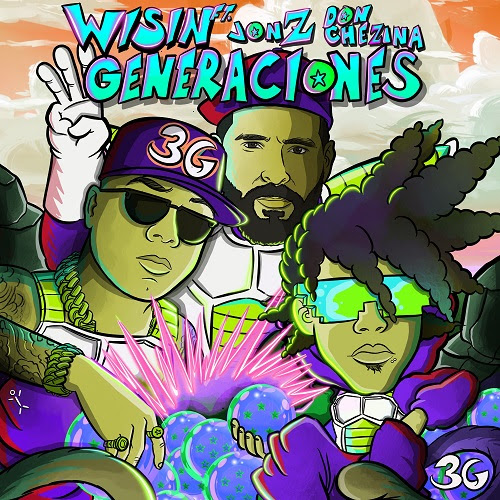 Following weeks of anticipation on social media,  today, Latin urban music icon Wisinfinally releases his new song and video “3G“, featuring Jon Z and Don Chezina. A track that will, without a doubt, have everyone dancing this summer.  “3G” is a brand new song that is also a throwback as it features the chorus of “Tra Tra Tra” one of Latin urban music’s most popular hits of the 90s from one of  the pioneers of Reggaeton, Don Chezina; and for the “3G” Wisin enlisted one of the genre’s young rising Trap/Rap stars, Jon Z. Each artist adds his own style to the song creating a unique dynamic that sets “3G” apart from the very moment Wisin opens the track with his powerful unmistakeable voice. “With ‘3G’ I wanted to unite these three generations, marking the past, present and future of Reggaetón. . . Don Chezina, one of the pioneers of the movement, who set a standard and opened the door for artists like me and a young breakthrough rapper who is part of the future of urban music. . . the result is a song that is monumental and timeless“, Wisin said. “3G” is the first track off Wisin‘s upcoming solo album, to be released later this year. It was produced by DJ Urba and Rome and written by the artist, Don Chezina and Jon Z.

Director Mike Ho, who has worked with Cardi B and Nicki Minaj among others, shot the video that showcases each star’s charisma as they perform at a modern club full of dancing women. Wisin is currently touring the United States alongside Yandel with the “Como Antes Tour” which has filled many of the most important venues in the cities they have performed. The US leg of thee tour ends this month with shows at the AmericanAirlines Arena in Miami on June 21st, and at the Amway Center in Orlando, on June 23rd.