Back From Her successful Tour In Europe, iLe Gets Ready To Perform In The United States 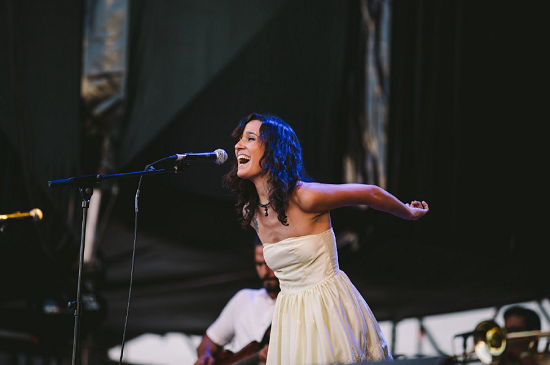 MIAMI – Sony Music/ Farándula magazine- Puertorican singer iLe, who won a GRAMMY® this year for her debut album “iLevitable”, has just returned from an extensive tour covering seven european cities where she performed with her band with great success. This tour included Amsterdam, Bologna, Barcelona, Madrid, Amorebieta, Cartagenaand Aragón, where she was praised by her peers and the press.
“The musical delight offered by iLe on the floating stage of Lanuza should be remembered in the coming years at Pirineo Sur. Delicate, sensible, nostalgic and with a very powerful feminist discourse. That was iLe’sperformance .” – Cultural Magazine ‘Quedamos en Huesca’.
“iLe’s assured slow-burning vocals, her command of the stage and her connection with her excellent band made clear that she has outgrown being described as “Calle 13’s little sister.” – Billboard.
2017 has turned out to be a very productive year for the Puerto Rican singer, who proudly carries with her the familiar sounds of her history, on tour throughout the world, a faithful representative of Caribbean music of the ‘Bolero’ and ‘Bugalú’ era. Amongst her more recent achievements iLe composed the lyrics and sang the song “Vienen A Verme” for the series “El Chapo”, on Netflix.
Currently, she is getting ready to take her Interpretative quality and all her musical talent to the Center for the performing arts of Puerto Rico on September 30th, to then continue her tour through various US cities including:
iLevitable Tour
Sep 30 – Puerto Rico – Centro de Bellas Artes
Oct 28 – New York – Mercury Lounge
Oct 30 – Virginia – The State Theater
Nov 02 – Miami – North Beach Bandshell
Nov 04 – Orlando – The Social
Nov 06 – Dallas – Trees
Nov 07 – Houston – Scout Bar
Nov 08 – San Antonio – The Rock Box
Nov 11 – Tucson – The Rialto Theater
Nov 12 – Tempe – Marquee Theater
Nov 14 – Anaheim – House of Blues
Nov 15 – San Diego – Music Box
Nov 16 – Santa Cruz – The Catalyst
Nov 18 – Northridge – Valley Performing Arts Center
Nov 19 – San Francisco – Social Hall SF
Click HERE to watch iLe‘s European Tour video.
Although iLe recently celebrated the first year since her debut album release, iLe enjoys plenty of experience on stage. For over ten years she sang with her brothers from Calle 13, Residente & Visitante. Today she is taking command of new stages and giving a wide diversity of audiences the opportunity to see and hear this artist live, who surprises with her performance and her presence when she interprets the songs from her album iLevitable.
Follow iLe on:
www.ilevitable.com
www.facebook.com/ilevitable
www.twitter.com/ilevitable
www.instagram.com/cabralu
www.youtube.com/iLeVEVO
Credits
Photographer: Alejandro Pedrosa