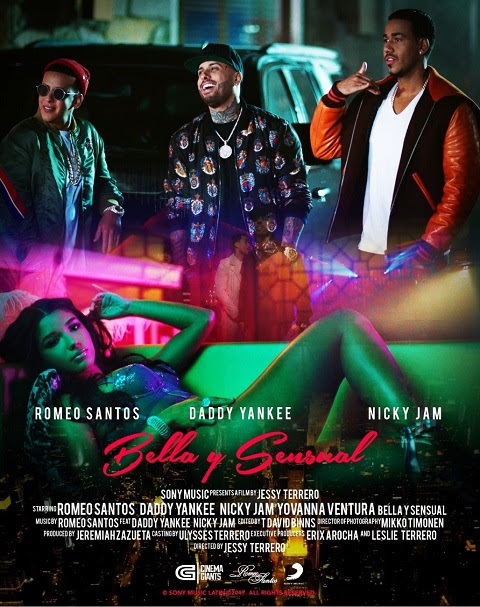 The Official Video Was Filmed On October 23-24 In New York And Has Accumulated Over 15 Million Views Since It’s Release This Past Friday
This Song Is Included On Romeo Santos’ Latest Album Golden, Which Had The Biggest First-Week Sales Of Any Latin Release In 2017
Romeo Santos, the undisputed King of Bachata, is joined by Daddy Yankee andNicky Jam on their new single “Bella y Sensual”. Since its release this past Friday, the official video has accumulated over 15 million views on the artist’s official VEVO channel. The music video was filmed in New York by the renowned director Jessy Terrero.
These three giants of Latin music battle for the attention of an enchanting woman who personifies “Bella y Sensual,” in a colorful video that’s fun, seductive and risqué.
“Bella y Sensual” is the third single from Golden, Romeo Santos’ third solo album. This record hit #1 onBillboard’s “Top Latin Albums” chart and is available via Sony Music Latin. It has already been certified 3x Platinum in Chile, Platinum in Spain and Gold in Argentina. It has been streamed over 80 million times on Spotify and forms an integral part of its popular Viva Latino playlist.
On Internet radio services worldwide, “Bella y Sensual” has surpassed 300 million streams, with the YouTube/VEVO audio track accumulating over 43 million views. Soon after its release to terrestrial radio, it became the week’s most-added Latin single. It’s another massive hit for Romeo Santos thanks to its tropical rhythm, urban influences, catchy hooks and outstanding vocal performances.
Romeo Santos recently made history thanks to Golden’s impressive sales: not only is it the biggest-selling Latin album of 2017, it’s the highest-selling Latin release since his previous album, Fórmula Vol. 2, in 2014. In addition to hitting #1 on the Billboard “Top Latin Albums” chart and the Mexico sales chart, it also reached #10 on the highly competitive Billboard “Top 200 Albums” chart, which includes all genres in the U.S. and Puerto Rico. It was the first Latin release to hit the overall Top 10 since 2014.
Golden is one of the most important albums of the year not just in Latin music but in the industry in general, and it represents another historic accomplishment for Romeo Santos.