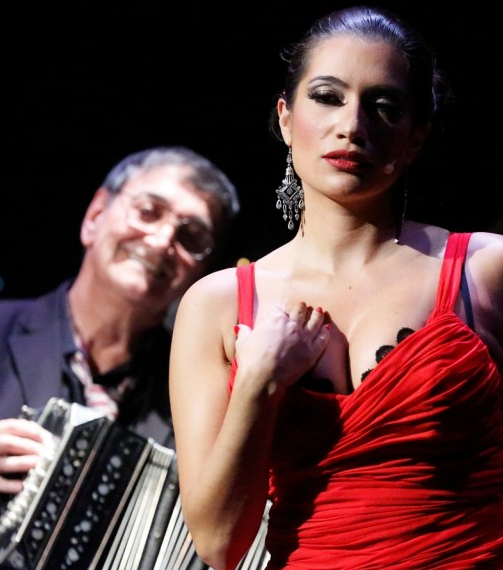 Soprano, Catalina Cuervo, one out of five of the most prominent Colombian Opera Singers, has made her way to Grand Rapids to partake in the Opera, Maria de Buenos Aires. Maria de Buenos Aires is an emotion-packed Opera where love meets violence, fun meets passion, and sadness encounters reality. The Opera is written based on a story line involving the life of a prostitute in Buenos Aires, and the aftermath of her death. Maria de Buenos Aires, the main character, is a poverty-stricken girl who was born and raised in a small town. In search of something more than small-town life, she travels to Buenos Aires in hopes that she would find success. When she reaches her destination, she ends up participating in the lively nightlife that Buenos Aires has to offer. She falls victim to the love of the Tango, and pursues this spectacular dance incorporating a new flair to it. Maria is seen to be one of the most beautiful and seductive women in Buenos Aires who can easily hypnotize men with her appearance and style of dancing. As the story line progresses from the opening seen, one will be taken through a journey where they come face to face with Maria, Maria’s shadow, singers of Payadas, a goblin-like narrator, marionettes who follow every command, a wild group of psychoanalysts, and many members of the underworld of Buenos Aires.
Cuervo has been playing Maria de Buenos Aires for the past five years. Her first appearance taking place back in 2011 at the Chicago’s Hispanic International Music Festival. Cuervo, however, has more in store for the arts than her role in Maria de Buenos Aires. Catalina Cuervo was born in 1981 in Medellin, Colombia to her parents Blanca Samur and Mauricio Cuervo. She immediately started off her musical career by taking on piano and playing it until the age of twelve. Cuervo then turned to Rock music and once she discovered that her leisure listening had turned into a love for the music she began to study guitar and attended a music academy, Only Rock, in the neighborhood of El Poblado. One day, her father took her to the Metropolitan Theater to watch the presentation of Martha Senn; that one small trip between her father and her sparked a passion that furiously came alive. She knew from that day on she would live for the arts. Cuervo knew that she wanted to become an opera singer, dance, and actress. With further support from her parents, she decided to travel to America to study music and sound engineering. At the age of 18, she attended Miami Dade College where she took on numerous roles in Operas and eventually graduated in Sound Engineering Technique. Deciding to continue her educational career in music, she attended Roosevelt University of Chicago where she earned her Master’s in Music and Opera. Cuervo now mixes her educational knowledge and fiery passion in order to work as an opera singer, model, fitness enthusiast and a profesional Arabic Dancer.

For more information or to purchase tickets visit >> www.operagr.org/maria-de-buenos-aires/