Interview with Jason and Kris Spaulding, Owners of Brewery Vivant 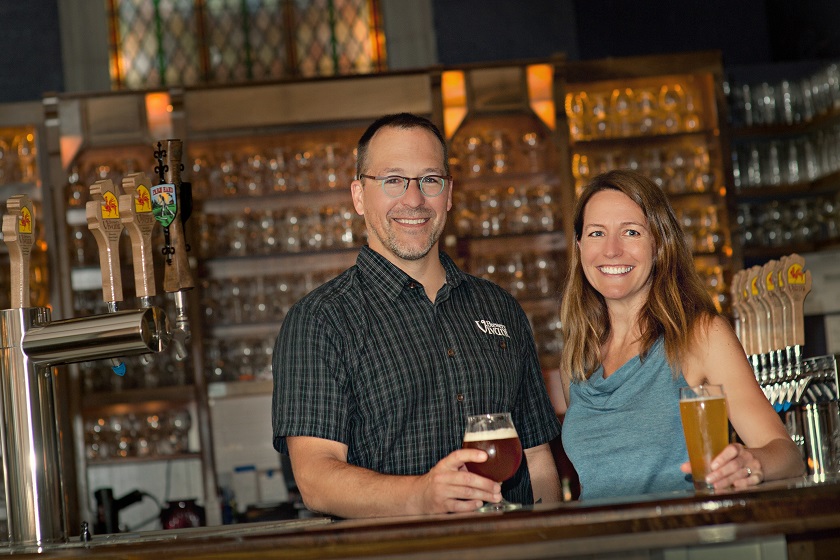 Many of the best things in life come in pairs: peanut butter and jelly, Mario and Luigi, Netflix and chill (badum-tss.) Other combinations, however, don’t mesh quite as well. Think oil and water, red wine and seafood, me and Monday mornings. Thankfully for husband and wife team Jason and Kris Spaulding, the owners of Grand Rapids’ very own Brewery Vivant, they fall into the former category of pairings. In a city already known as “Beer City USA,” how did they manage to stand out and establish one of GR’s destination breweries, all while having great food and promoting sustainability? Farandula magazine sat down with the power couple to find out!

FarándulaMag: What inspired you to open a brewery?

Jason: I was one of the founders of New Holland Brewery in the past. Kris and I were at the age where we were getting married and talking about starting a place and what that would look like. We took the time to write a business plan, combined both our passions, and tried cramming them into one concept. Our goal was to do something other breweries weren’t doing at the time. We put a lot of emphasis on sustainability and the thought process of making beer, challenging ourselves to make it really unique. We fell in love with these farmhouse beers from the Southern Belgium area. So we took a trip together over there, toured around, had a great time, and got really inspired. It was a confirming thing to us — that we were on the right track by being a “focus brewery.”

FarándulaMag: How did you two meet?

Kris: We met when he owned New Holland. I was a regular. The first time we met, we both know we were there, but don’t remember each other [laughs]

Jason: I gave the restaurant she was working in at the time a tour of New Holland Brewery in the early days. She knows she was there and I know I gave it, but we don’t actually remember each other being there.

Kris: Then four years later, we went on a date!

Jason: Our first actual conversation was at New Holland. She was explaining to me how our beer wasn’t quite as good as Bell’s Amber. And ever since that time, I definitely remembered her after that.

FarándulaMag: What’s your favorite thing about what you do?

Jason: I really like the creative side of the beer; making recipes and kind of pushing people’s boundaries a little. A lot of people either think they don’t like beer or don’t like Belgian beer. It’s fun to come up with different types of recipes and different ways to make beer to try and expand people’s minds about what they think beer is. We can do sour beers, hoppy beers, beers with spices and fruits. People who think they don’t like beer — that’s kind of a challenge to me! Especially people who say they like wine but not beer, because we have these sour beers and fruit beers where you would use the same language to describe them as you would to describe wine — like aroma and acidity. So it’s fun to come up with something that at least surprises them. The minimum we get is: “oh, I think I kinda like that!,” but sometimes we totally convert people.

Kris: For me, beer is a vehicle for what I like doing, which is the sustainability stuff. Ask Jason that question and he’s gonna talk about our product. Ask me and I’m proud of what we’ve done in our community, promoting sustainability, sourcing ingredients locally, connecting with our neighbors, and creating a good working environment for our employees. We also do a lot of volunteering as a company. I think we’re at 250 hours already this year. That’s my gig. It’s one of my favorite parts of my job… All the things that make up the business that don’t necessarily need beer as the product — but it happens to be a cool product!

Jason: We’re both passionate about beer, but our driving forces are different and we kind of meld them together. 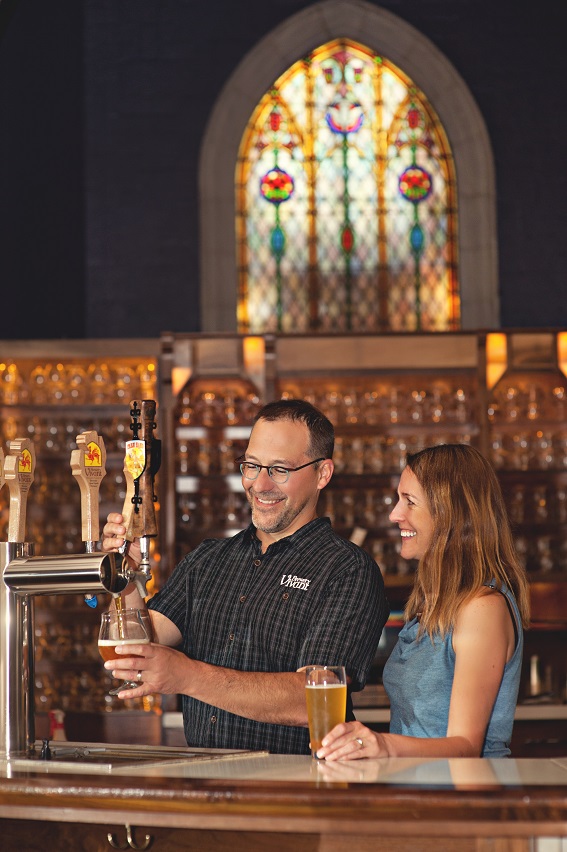 FarándulaMag:  Your menu is unique too, especially for a brewery!

Kris: If you look at our business plan, it was about all the beer we have and pairing it with great food and being sustainable. I agree with having a beer for everyone whether they realize it or not. Surprising people is great, but I think we do that with food too! When we first opened, breweries all had the same food. I think the trend of good food is starting to get picked up on now, but we were there in beginning of that, which was awesome to be one of the first places. It’s like casual fine dining in a brewery.

Jason: I think the whole culture of food in America’s been changing over the last 10 – 15 years. When we first opened, people were mad about our menu. They expected pizza and hot wings — and we had duck confit and escargot. Now people actually want freshly made food and care about supporting local. They pay more attention to what they eat. Before it was all about frozen food, fast food burgers, soup in a bag. That’s how they did it. Now they wanna know where it’s coming from, what’s behind it… and that means a lot.

FarándulaMag: What do you think American brewers need to learn from Belgian brewers?

Jason: One of the influences we took by meeting Belgian brewers was taking an artistic approach to making beer. We try to be a little bit experimental with spices and fruits and trying different methods. Before craft beer really took off, like when I was in college, there weren’t many flavorful beers. The most popular ones were pretty much the same of beer with different labels on it. The taste profiles only had slight variations. They were all well-executed, but all the same yellow, fizzy, kind of bland flavor. Not real interesting. People have really come a long way since then. With this craft beer revolution, people are really going for maximum flavor, which includes all sorts of creative things like rediscovering different methods of how to use hops, when to dry hop, and constant experimentation. It’s really reigniting people’s excitement for beer.

FarándulaMag:  What’s it like having your spouse as a business partner?

Jason: Kris and I are good partners. I wouldn’t recommend every husband and wife work together, but she and I compliment each other because we have different focuses and an underlying respect which is nice.

FarándulaMag:  What do you think is the most undervalued style of beer?

Jason: I would say our saison style of beer. It’s not very flashy with big flavors. It’s more subtle, but really interesting. Depending on what you’re eating or your mood, you’ll pick up different nuances and flavors in it. You can drink it as an easy-drinking beer, if that’s what you’re in the mood for… But we also have our duck nachos, one of our famous dishes here, which has a lemon rind on top. When you eat it with the farmhand, it really brings out the citrus qualities of the beer. It’s one of my favorite pairings. The trends now are huge IPAs and really big stouts because the flavors are extreme, but I think the saison is a really overlooked style.

Kris: I always like hoppy beers and spicy food. It’s so overdone, but it’s just so good!

Jason: We make this Belgian quadruple that we age in bourbon barrels for a year. It’s called Wizard Burial Ground. It’s a strong beer, but it’s kind of sweet and has this bourbon vanilla flavors going on with it. I love to pair that with blue cheese covered dates wrapped in bacon with this balsamic dressing on top.

FUN FACT! The word “vivant” in Brewery Vivant translated as “to be alive.” Very fitting for a brewery that’s all about enjoying good food and good beer! 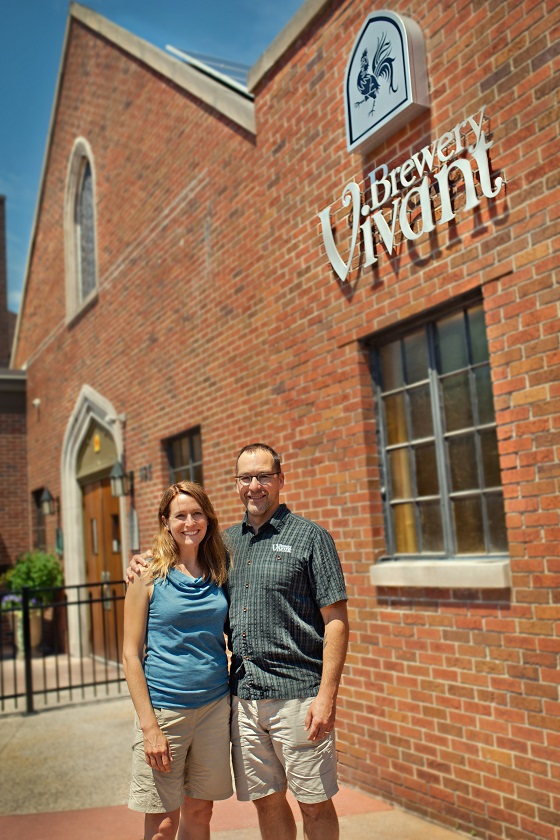 FarándulaMag:  How old were you when you had your first beer?

Kris: I didn’t actually drink much until I was 21. The first beer I liked was the Dundee’s Honey Brown. Then I moved into Bell’s Amber in the mid ‘90s and then a whole world opened up! Luckily, I never liked the crappy beer.

Jason: I was 14 [laughs]. Me and my buddy stole bottles of this beer called Wiedemann’s out of my dad’s garage. I don’t think it even exists anymore. We put ‘em in our backpacks, rode our bikes out, and drank a couple of them. They were warm, came from the garage, and we hated every second of it… but we still drank it!

FarándulaMag: Would that be a beer you would be proud of liking today?

Jason: Oh no! I’m glad there aren’t many pictures of it around.

FarándulaMag: What’s the most challenging aspect of running a brewery?

Kris: The market is pretty challenging right now because there are so many breweries.

Jason: What’s rewarding but also challenging is also having employees. We’re like a big family, so it’s our favorite part and sometimes our least favorite part… Hiring and firing people, trying to help them through life. It’s a lot of young people who are still learning who they are. Sometimes people sort of fire themselves by doing really dumb things and it’s heartbreaking to have to let them go… but we try to make a difference in people’s lives as much as we can.

FarándulaMag: Do you have any plans for the future?

Jason: We wanted to be a somewhat small destination brewery, so we don’t want our beer everywhere, but we want to be the kind of place where people come from out of town and bring our beer back to their hometowns. We want to build a brand that people trust and associate with Grand Rapids and the Midwest. I think we’re on the right path and doing the right things to get there. They say it takes 10 years to build a brand. We’ll be 7 in December and it’s been great so far! The neighborhood’s been very kind to us.

The fact that Jason and Kris are both very passionate about the different roles they play makes for a more compatible partnership. When it comes to running the brewery, neither of them is ever cast into the role of permanent sidekick because to the different skillsets they possess.  Whether its beer-brewing or sustainability management, they know when it is better to step aside and let the other take charge and give them a chance to shine. Because of this, along with the strong sense of mutual respect they have for one another, it is safe to conclude that this beer-loving culinary couple makes the list of the great duos in the Grand Rapids food and beer scene. So be sure to stop by Brewery Vivant for a pint sometime soon! And don’t forget to try their duck nachos. 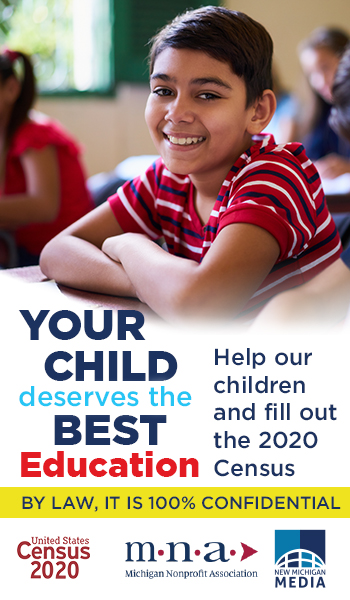 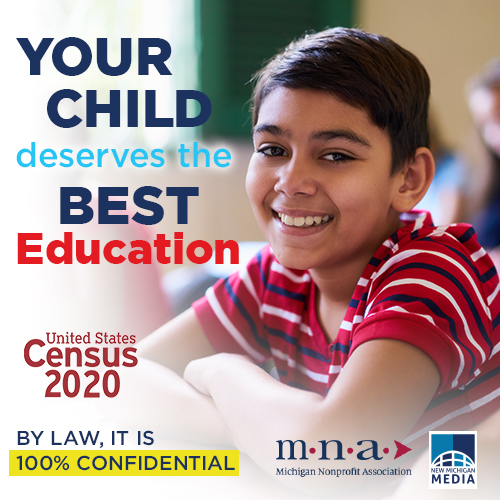 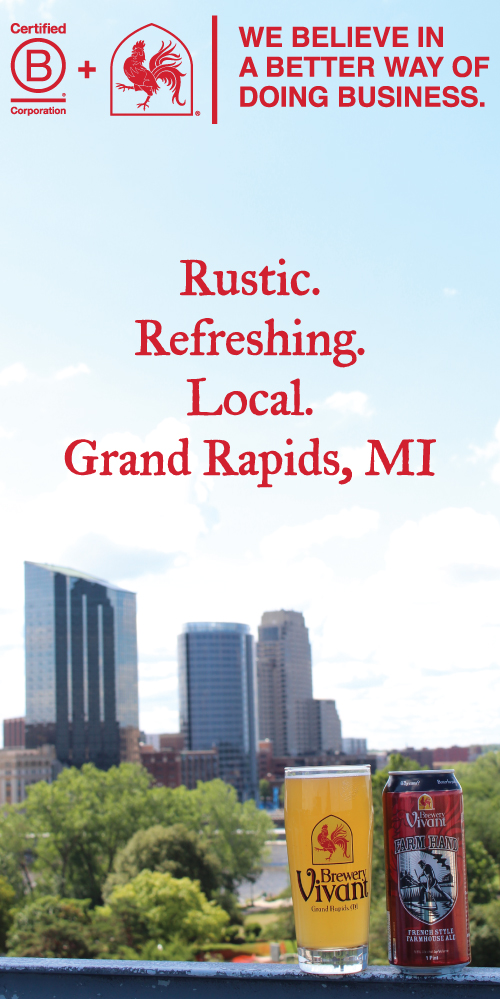