Alex Lora, EL TRI Continues the Tour in Celebration of his 50th Anniversary with 2 Sold Out Concerts in California 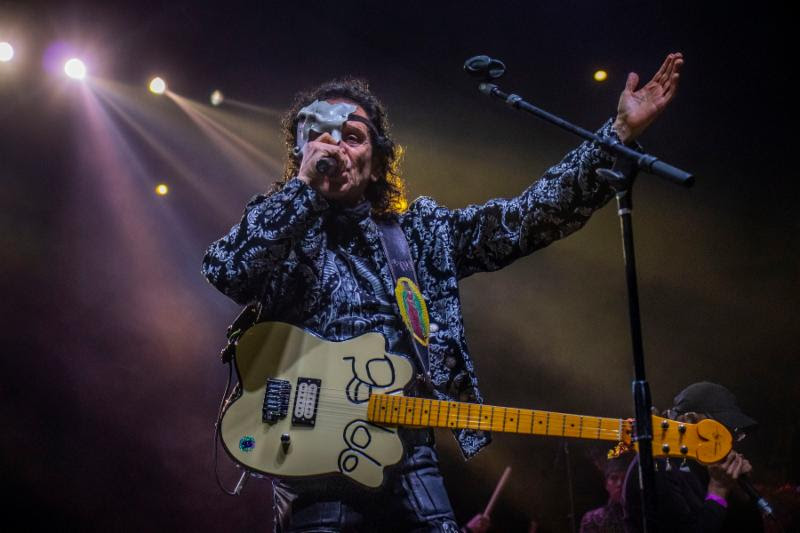 With a video that summarizes 50 years of events and social movements in Mexico, in parallel to Alex Lora’s musical journey from his early years in 1968 to the present, El Tri offered a spectacular sold out concert this weekend at the Convention Center in Los Angeles, to celebrate their 50th Anniversary of musical trajectory with several special guests The concert that began at 8 p.m. in front of an ecstatic public of more than 7000 spectators, lasted 3 uninterrupted hours, through which El Haragán, the group La Tribu, Sergio Arau, Interpuesto, the legendary guitarist Javier Bátiz and the Orquesta de Cuerdas de Santa Cecilia, performed with Lora several of his countless and successful hits. The night before, the group presented the same concert in San Jose, California in the City National Civic in front of 6000 people who mostly wore the El Tri t-shirt or the Mexican flag. Alex Lora is the staple of Mexican rock; an emblematic figure and pioneer of rock in Spanish. With 50 albums and a compilation of the 50 years of rock and roll composed of 4 discs and a DVD of the symphonic concert recorded in Peru in front of more than 80,000 people. This special edition summarizes half a century of immortals songs, containing revisits of several of his early hits, which were recorded in the studio again.  Few can boast a celebration of half a century of an uninterrupted and successful artistic career- Alex Lora is one of them. To celebrate it, El Tri presented a great sold out concert at the Palacio de los Deportes where more than twenty guest artists participated with the Symphony Orchestra Esperanza Azteca in a concert that lasted a little more than 6 hours. Faced with the question of what it feels like to complete 5 decades of career and if there are any goals left to succeed, the author of the hits: “Oye Cantinero”, “Niño sin Amor”, “Triste Canción”, “Piedras Rodantes”, “Parece Fácil”, “Metro Balderas”, “Todo me Sale Mal”, “Perro Negro”, “Sara”, “Chavo de Onda”, “Chilango Incomprendido” and “ADO”, among many others, replies: “When I started rock and roll, I didn’t say to myself ‘I’m going to do it for fifty years; I’m going to record fifty albums; they’re going to give me the Grammy of Musical Excellence; I will be invited to carry the Olympic torch in London; They will make wax figures of me in museums in Mexico City and Guadalajara; They are going to put statues of me in Los Angeles, Guadalajara and Puebla; they are going to give me the key of several cities or they’re gonna give me platinum and diamond records, or National Geographic will film a documentary. I simply said ”(Bleep) everything and long live rock and roll!”